“The most awesome mission of the storm is that it reminds us that the universe is never actually a calm garden with flowers! Peace is always an exception in this universe!”
― Mehmet Murat ildan

As the ceiling shuddered above us, there was an earth-shaking, appostrogetic tumult above our heads that entered our whole being and made our innards shake and tremble. Betsy was terrified (as were we all) and continuously uttered piercing, high-pitched little screams into my ear. Only I could hear them… and that is quite something, because she wasn’t whispering! Earth, dust and pebbles were raining down on us from the floorboards above our heads as though it was a sieve. I held the candles, one in each hand, so tight, that I broke them both in half. (Later I experimented to see how easy that is to do; it’s pretty close to impossible.)

Suddenly, a tree shot through a basement window about three feet in front of our faces —no one was hurt, not even a scratch. Then, as fast as it started, it finished. An ominous silence filled the room. As suddenly as it came, that appostrogetic din disappeared. We had all nearly stopped breathing, as though breathing may have worsened what was already happening.

“Stay here,” Dad said. This time everyone did as told without questioning. Dad manoeuvred his way around the tree and disappeared into the next room where the stairs were; the staircase was still intact. A few minutes later he returned, “It’s okay, follow me.”

We crept out from behind the bed and under the tree in single file; nervously, silently and obediently following Dad in hushed fear with Betsy and I pulling up the rear. The next room was dishevelled, but intact. I looked up the staircase and saw it was littered with a maze of wires and garbage. A big piece of blue paper covered the top of the stairs. I wondered where that paper came from and how it got into our house? It finally hit me; that was not paper, it was the sky! Where was the house?

Dad, unaware of what was at the top of the stairs and in order to avoid the wires, led us through the basement door into the garage. He attempted to pull the garage door up, but could only budge it a couple of feet. Two pairs of feet came into view standing on the other side of the door. Their hands came down and also tried to lift it up. It was Susie and her brother Tom. They hurried over from their destroyed house to make sure that Betsy was alright. Dad told us to crawl underneath the garage door. Susie and Tom had been home alone and made it only half way down the basement stairs when the tornado hit their house. They fled to a safe wall of the basement, but narrowly missed being hit by the kitchen knives which flew down the staircase after them.

We were on the basement level of the house outside the garage door, but walked further out and up the driveway towards the road; looking back, the scene was chaos. The house was completely gone, nowhere to be seen. Gone with the wind. It was not even on our land. Nothing of ours was on our land, but on it were a lot of other people’s things. It had become home to a pulverized piano hanging in a tree, a crushed car, and other assorted smashed and broken objects of all sizes. It looked like a garbage dump. All our possessions had disappeared in the tempest. A lone figure, an embarrassment to our bleak foundation, was a toilet, standing arrogantly against the backdrop of a magnificent sunset, which dared to paint itself in the sky. The fireplace in the living room raised its head; a chimney as a bold tombstone, untouched and proud. The stone mantle above the fireplace, was still intact. A marble statue of a head, carved by Uncle Paul, stood resolutely on it. We called the sculpture the Banana Man because his head was shaped like a banana. One hand covered its mouth and the Banana Man stared upon the nothingness in deep meditation. Destruction lay uncovered. The whole house had flown away and vanished in that powerful speeding black wall, and we stood stock still staring.

Down the road at the Smucker’s house, a car “dropped” by and landed just in front of the kitchen; my aunt and uncles investigate. 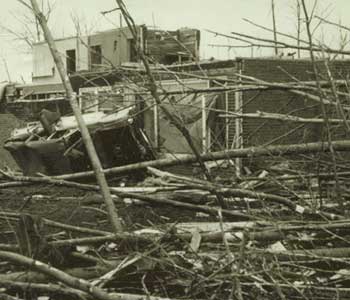 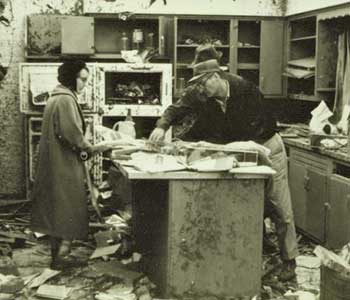