(*Dad would spit out “yabadabadoo” before every sneeze!)

Growing up, many people commented on how much I resembled my Dad! I was a normal, image conscious teenage girl, horrified to be compared to Dad, who tended to be overweight and wore a goatee! But now, whenever I look in the mirror, I see Dad in my eyes —he is always looking back at me.

Parents are always on stage; they are the star in their children’s lives. All my parents are heroes. I had two mothers. After the death of my first mother, my second mother earned her way into my heart, because she was absolutely amazing —there was no way around it. I was privileged to call her Mom.

Dad was incredible, admired by all, everyone’s friend. He beautifully doodled notes and thoughts (without detection) during meetings and church. He saw humour everywhere and would sometimes just start giggling. Dad loved to belt-it-out with great theatrics in operatic song; but his love and compassion for everyone was his greatest virtue.

He battled with Parkinson’s. The last two or three times I visited him, he’d always say, “This good-bye could be the last!” Dad fully prepared us for his departure. 2008 was a difficult year for both Dad and Mom and led Dad to search for holiness with great tenderness and brokenness. His personal, and longstanding mission, was to understand the meaning of forgiveness. Dad knew God; his life showed it. He was confident and unshakable in facing death fearlessly and positively. There were times in 2008 when both Mom and Dad could have died.

January, 2009, Dad speedily went “down-hill.” Mom too, was seriously confronted with the possibility of death; a possibility that she rarely considered. That was always her strength —that she rarely considered death. The doctors hadn’t given her much hope to live past 50; in fact, they thought she was going to die at 20.  Mom’s directive was always life; aimed for life, daily driven to live every day to her utmost. Being a paraplegic, she confronted death many times, but not as much as in the year 2009. Her life-long resolve to live, was the only reason she survived into her mid-seventies; a strength for which she was highly respected. In the same way, the opposite was Dad’s unique strength; his ability to look at death calmly —the climax of life, the finish, where it suddenly “gets better.” Even so, his sudden departure took us by surprise.

Six days before Dad died, my elder sister Ruth phoned me in India to let me know that he was not well; he was disoriented, very weak and unable to respond. The news disturbed me and I felt very anxious about him. I was unsure what plans I should make. There was still hope that he would recover with the right treatment. That first night, I couldn’t sleep. 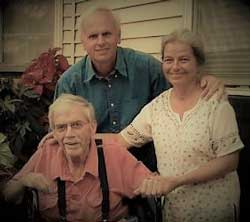 Then, I had a dream:
I was travelling on a bus with Mom and Dad. Dad leaned over and whispered, “I am in too much pain, and I can’t bear it anymore.” So, I took his hand and led him off the bus. After we had descended the steps of the bus, it went on. Suddenly, it dawned on me; Mom was still on the bus! I felt terrible! I had abandoned her! I was embarrassed even after I woke up. It was only a dream… but how could I have left Mom alone on the bus?

Ruth phoned again the next day to let me know that Dad was going down-hill very fast, and that he was in a lot of pain. He was in so much pain, that Ruth either wanted him healed immediately or released to death. I was surprised, as I hadn’t realized that he was in so much pain. She also mentioned that Mom was doing amazingly well. Ruth noted that she was growing stronger daily and had every hope of being able to leave the nursing home where she was being treated. Suddenly, my dream began to make sense. Dad had to get off the bus, but Mom was going on. A few months earlier, Dad and I prayed together every night holding hands. I had taken Dad’s hands to lead him off the bus. Dad valued God as the final authority of life, but allowed me into his journey. In my dream I took his hands; but in reality, it happened when we prayed. Dad departed for a better place; he had his finale. At the last curtain call, God took his hands and led him off the bus; I released him.

I remember some of his earlier Yab-ah-dabs. He had smiling eyes or deep sad eyes, depending. Wonderful story