Sadhu Sundar Singh; 1989-1929, walked across the Himalayas numerous times. He is believed to have died in the foothills of the Himalayas in 1929. I met him via his biography. The consequence was life changing.

It was January 1975, and I was seeking a book to read, anything that wasn’t Christian. I was surprised to find a book that met this requirement on the bookshelf of Dr. Olson, who was a follower of Jesus. It was titled, Sadhu Sundar Singh, and there was a picture of him on the cover. He wore the typical saffron garb of a Hindu sadhu. I knew one person who went with the search party into the Himalayas to find him, but Sundar never returned. Before his last hike across the Himalayas, Sundar announced that he may not return. He was right.

I first met the Sadhu in his beloved mountains, the Himalayas. If you’ve been there, you’ll know why he loved them. Sundar Singh walked back and forth across those mountains many times on his way to Tibet. He was born in a Sikh family, but wore the dress and lived the life of a sadhu, wanting to relate to people genuinely. But I’m jumping ahead. He is such a great hero of mine. Reading his story enthralled me. When I swiped the book off Dr. Olson’s shelf in the mountains, I was working at the children’s home on the plains with Yip.

For the past decade the children’s home was in a constant state of neglect and disrepair. The walls grew mould, old paint shed itself like dandruff, parts of the ceilings and walls were missing; the “two” rooms I shared with 50 girls was more like one room because of the huge hole in the wall that the girls and I stepped through. That hole was as big as a picture window, the angular bricks projected from it and framed its edges. I was worn-out by the hopeless poverty, and not just physical poverty, but the total absence of care and love for the children. I made it my duty to write a letter to Dr. Olson who was a board member overseeing the home’s functioning. Dr. Olson was a very kind man who had been good to me. The children loved him. He gave the children physical check-ups when he visited the home. His only fault, in my opinion, was that he nagged me about Jesus.

“The whole place reeks of negligence,” I wrote. “How can you consider yourselves Christians when the poverty of this place glares at you in the face? The food is terrible. It has stones in it. The children don’t even have drinking water. They get sick, they get infections, they are covered in lice. There is no vehicle to take them to the hospital. And there’s nobody that looks after them or cares or loves them. This is not the way to raise children. You should be ashamed of yourselves.” I went on and on with fine-tuned points. Dr. Olson, the lucky receiver of my epistle, wore a quirky smile as he read it, and said it was a very detailed document. “Worth keeping.”

My letter didn’t change a thing. It merely provided an interlude of entertainment. The conditions remained terrible. Unknown to me, the truth was Dr. Olson’s presence on the board was a lifesaver to those children. He was there to help and was simply doing his best to end the underlying greed of certain stakeholders who sought to benefit from the home.

I was young and ready to take on the world. I had conceded in my understanding of Jesus, for after reading Psalm 139 and Genesis, I knew beyond any doubt that the Bible really was God’s word, which logically meant Jesus was God. I read the words, but Istill hadn’t connected the dots. I assumed that when I believed, a type of osmosis occurred and I was transformed into a Christian. And yet, something was missing that I couldn’t put my finger on.

At the home we treated the children for illnesses we readily diagnosed. We had some training as lay-doctors, a practical necessity, but the kids continued to get sick in ways we couldn’t treat. Yip then carried them five kilometres to the hospital. Because of this, some of the doctors and staff became close friends. Visiting the hospital always included a generous cup of tea or coffee with cookies or cake. We craved those delicacies. It’s hard to explain what a luxury a simple biscuit or a cup of tea was. Later, I walked there in the summer midday heat to attend a community health course. Walking in the heat was not wise, but I survived, loved the course, and the loved the treats.

Back to February 10, 1975: It was late at night when I arrived back at the home. I pulled out the book, Sadhu Sundar Singh, and began reading. I thought it was a book about a Hindu sadhu. But Sadhu Sundar Singh grew up in a Sikh family. He studied at a Christian school where he learned about Jesus. But he was a proud Sikh and showed it by burning Bibles in the school yard. Though Sundar was only a boy, he lived in the era of the British Raj and understood the hatred that filled the atmosphere towards “white” people. His actions weren’t making sense to his mother, who knew Sundar as a kind and thoughtful boy. The teachers did not know what to make of him. Sundar, himself, knew he was acting out of character. He soon felt such deep meaninglessness in life that he decided to kill himself.

He resolutely laid on the train tracks and told God that if he didn’t reveal Himself, he would die with the morning train. Just before dawn he met Jesus. Jesus appeared to him on the cross. He got up and happily told his parents what happened. They thought he was delusionary and mad; they tried to talk sense into him. Sundar’s father was ashamed. His family’s reputation was at stake and he saw no other alternative but to kill Sundar. He poisoned Sundar’s food and nearly succeeded in killing him.

Delirious, Sundar wandered about, desperately sick. He was rescued by those Christians he had once taunted. He was nursed back to health but couldn’t return to his family. Realizing his course of life was changed, he decided to serve Jesus as a sadhu. His family relentlessly tried to convince him to return to his religion, but he refused. He loved his family, but would not turn his back to Jesus.

I was spellbound. It was amazing. Why did the vision of Jesus change his life so much? I’d had my own moment of recognition, of understanding the Bible to be God’s word, but, if only I could meet Jesus like Sundar did! For me, Jesus was only a name, not a person to meet. I’d always assumed that a “personal relationship with God” was purely a Christian phrase! It was baffling.

I continued to read Sundar’s story: He walked back and forth across the mountains into Tibet, desperate for people to know Jesus. He faced death almost every day, whether from perilous exploits or angry people. Once, he was thrown into a well and a lid was placed on it; locked and sealed. He was left for dead. Yet, he was rescued. The key to the well was around the neck of the chief who threw Sundar into it. Sundar definitely had angels working over-time for him.

Sadhu Sundar Singh talked to the animals—even tigers. Dangerous animals, including poisonous snakes, would turn away, leaving him unharmed.

Sundar undoubtedly knew Jesus in a unique, intimate way. I wondered how this could be? How can anyone talk to animals? How can anyone talk to Jesus? I longed to talk to God and I wanted to hear Him talk back to me. That thought took me back to my childhood when I used to pray to God in my fairy-tale-type fashion. Could anyone really talk to Jesus like he was their brother? Like a close friend? Could God really become that close and intimate with me? Prayer? Is it really just chatting to God? I was suddenly very jealous of Sundar Singh’s most remarkable relationship with the Almighty. I wanted that relationship.

That night at the children’s home I sat upright on my rope bed, a thin cotton mattress beneath me. I read the final page and silently closed the book. I looked up. “God, if this is the kind of relationship I can have with you, like a close friend, then I really want to be your friend.” It was simple and direct. No pleas to forgive my sins. No pleas to be my saviour. It wasn’t anything like that. I left out all the classic beseeches and simply asked if we could be friends. Immediately, simply, Jesus answered. I felt the Holy Spirit coming into me and I knew he was with me. My friend! I got up and I pranced around the room. I was so happy, just like when God opened my eyes to the Bible. The bottomless joy filling me was Jesus. I knew it. And I knew that he loved me.

The next day I walked out into the sunlight with a knowing smile plastered on my face. Everything around me was magnified and bright, every colour intensified. Earth was the stage, brilliant spotlights radiated down from heaven. The sky was an electric blue and the greens glittered like breathing jewels. The whole world had changed before my eyes. I was so happy. I couldn’t contain myself. I couldn’t stop talking about the WOW of it all. A Miracle!

And yet, it was just a normal day. Nothing more miraculous than a normal day. But I could see and understand that normal is a miracle! And that’s what asking Jesus to be my friend did for me. Jesus made my life an everyday miracle. And its never changed. Every morning, every day is new. Every day is a day with my friend.

In the words of C.S. Lewis:

I gave in and admitted that God was God. 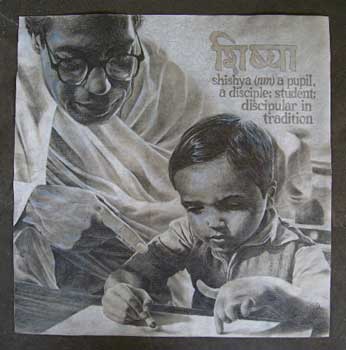 Shishya is Sanskrit, it means disciple.
Sundar Singh was a disciple, a sadhu.

(*above pencil sketch by Paul Crouse)

One reply on “Sadhu Sundar Singh”

Now I want to read this book too ! ☺️