Every dream begins with a dreamer.
Always remember, you have within you the strength, the patience, and the passion
to reach for the stars to change the world.
Harriet Tubman

April 1965; I was eleven and informed everyone that I was going to India to start an orphanage. Who’d believe an eleven-year-old child? Those skeptics didn’t stop me from dreaming; they only added coals to the fire.

By April, 1975, I’d been in India for six months. I reclined on my bamboo mat on the strangely comfortable cement roof and gazed at the millions of stars lighting the sky. I mused, “Lovely Moon, however did I get to this unbelievable place in my life?” Though only a sliver, the moon was brilliant, like a beating heart; nothing was around for miles to obscure any of the nightlights­­; a hundred million stars sparkling like tiles as a ceiling to the universe. Stars are riches in rural India —diamonds in the sky. Not every country has such an array. The giant Himalayas stood outlined and glowing against the northern horizon, creating a spectacular backdrop. Lying on my back on my thin, bumpy bamboo mat, left me with inexplicable peace.

Budwara was there beside me, day and night, always waiting for me to come. At night I arrived late; my mat would be rolled out for me and she’d be sitting on her mat spread next to mine. Budwara means Wednesday. Was she born on a Wednesday? So much mystery hid behind her shy giggling face… why was she left at a children’s home? What deep hurts lie buried inside, invisibly warring against her?  The children were so hungry for touch; deeply hungry for love.

There was no electricity for fans or lights. During the hot summers, the rooms were stifling hot and buzzed merrily with mosquitos —totally unbearable. Thus, I with all the girls marched to the roof, hoping to catch the draft of a cooler breeze and ride on it into sleep.  But I was mesmerized by the stars.

Daily chores became routine, as did the trip for baths. I’d herd the barefoot girls down the village road, thick with soft filmy dust. Each step brought up swirling brown clouds which slowly thickened on us as we made the two-kilometer walk. 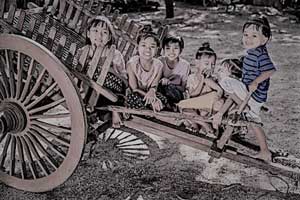 Unfortunately, the same thing happened after our bath on the way back. Our bathtub was the village canal where buffaloes and oxen bathed; animals were washed slightly downstream while we bathed in our clothes, upstream. Even our drinking water came from downstream. The oxen were driven into the water with two large oil drums on the back of the rickety, ancient looking wooden cart with large wooden wheels. Those two drums were slowly filled by bucket and the water was used for drinking, cooking, and everything else; it served one hundred children and a dozen staff and was never enough.

Leaving the compound was a-looked-forward-to event by all. As we walked down the road, each of my fingers were grabbed (holding hands with only one child at a time just wasn’t considered fair). After reaching the canal the girls would excitedly jump in and splash. I’d sit on the edge and dangle my feet in the water. Then a water fight ensued; who would be the lucky girl to wash my toes? With a crowd of wet little girls at my feet, the scrubbing began. Roughly, thoroughly and lovingly my toes, the soles of my feet, the sides of my feet, my ankles were scoured as though I was a pot or pan. It was a heavenly massage and ridded my feet of dead, dried skin. The dirtiest part of my body was not begrudged by the girls in any way; they had no hesitation in showing kindness and love. They wanted to touch me and they wanted to be touched.

The children’s home stood on a dry riverbed; rocks and stones —and yes, “dry riverbed” aptly described me. My idyllic childhood dream of serving orphans was not quite what I’d anticipated. I understood dry riverbed for it described my spirit; it also described the children who were thirsty for love. I was no heroine. I needed the kids more than they needed me. Could I really make any difference at all? Something deep inside was persuading me to stay. I was not even close to being ready to leave. What I could achieve seemed insignificant, but I just couldn’t walk away.

In India, respect is traditionally shown by formally bowing down to touch someone’s feet. The girls touched my feet and washed them in the canal. Budwara touched my feet whenever she looked at me. I clearly saw the love and respect shining from her eyes. My childhood dream of going to India became reality; but not in the way I’d imagined it. The fluffy, dreamy visions of working with sweet orphans was now a hard, difficult reality. And not only that, the conditions, and the heat and humidity of the seasons took a heavy toll on me.

Every dream begins with a dreamer.
Always remember, you have within you the strength, the patience, and the passion to reach for the stars to change the world.

Harriet Tubman was right about reaching for those beautiful stars to change the world; except the world remains the same —it was I who was changed. Gazing at the stars showed me that God was in this, though I couldn’t understand where he was. God was somewhere near; I determined to find him. I’d found children —but God? Wednesday —Budwara, changed my life. Living alongside children drew me closer to truth. Jesus said, “Let the little children come to me….” The closer I got to the children, the closer I was drawn to God; my dream began to have meaning.

Tears drop like stars falling from the sky.
Night closes upon the darkness I feel in my soul
My spirit yearns and cries out for God.

Tears are meaningless in the largeness of earth
It’s magnitude and enormity and terrible, fearful nature
Humble me in the vastness of galaxies upon galaxies.

I am lost and alone and seeking an answer
From God, who meets me alone;
In a quiet and secret place where rivers run dry.