A government cannot be truly just
without affirming the intrinsic value of human life.
Charles Colson

My sister, Ruth, is not in prison; she is one of the freest people I know. However, she regularly goes to prison because of her training as a mediator for offenders; her passion —restorative justice. It shows in her life —her love of people and inclusion of people from all walks of life; she is blind to differences in people. She was the first in our family to fight against the death sentence, even though our mother was horrifically murdered. Ruth never saw differences in people, because people are people; they’re different.

VOM began as a programme in Kitchener, Ont. It caught on quickly and was first launched in 1978 in Elkhart, Indiana, where Ruth and I grew up. Soon, VOM was an international concept and programme to train mediators help victims and offenders make compromises and restitution for crimes.

Thus, I landed up in prison with Ruth. She invited me along with her and asked me to bring my guitar and tell my story —but I was not to mention God! I was so excited to be able to share in the women’s prison that I immediately accepted the invitation. I had no idea what I’d say and put very little time or thought into it; I knew my story so well.

The day came when Ruth and I entered the premises of the prison. We went through the door and had our first inspection. A loud “buzz” sounded and we were ushered through a second large iron door and had another inspection. After that a bell rang and we were directed through the third cast iron door. My guitar was put through an X-ray machine and we underwent a final check. There was certainly no way to sneak anything into the prison. Finally, we entered a large, rather empty room where about 15 women had gathered in their prison uniforms.

Ruth did the introductions which ignited some curiosity about this sister of hers from India. I began to tell my story but immediately ran into a big problem —my story was about God! There was absolutely no way I even had a story unless God was in it. There was no way around it. God entered my story.

I told them how depressed, mixed-up, confused, angry and bitter I’d been because of the murder of my mother. I hated God and blamed Him. I told God that He was not Love and He was not Just. And, He would never be able to restore my faith in Him. How could God be such a criminal? God wasn’t the least bothered with my attitude. He took the opportunity to soften my heart when my anger raged and my barriers were weak. I pleaded with Him, “I just want you to be my friend.” He answered immediately by giving me the Holy Spirit. It was so instantaneous and so unexpected and unfathomable, that alone, I found myself dancing.

I sang the women a few songs I’d written about God and my journey. When I looked up, almost all the women were in tears. I turned quickly and looked at Ruth for direction. She was looking perplexed, but saw the opportunity as well and announced: Why don’t we go around the circle and everyone can share their God-story! 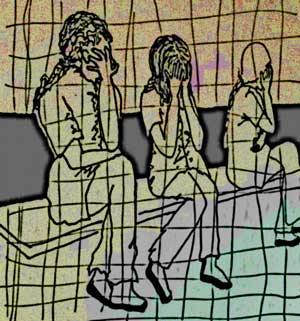 A VOM meeting concludes by reaching an agreement on the steps the offender needs to take to repair the harm suffered by the victim. In other words —the offender needs to make things right. I believe that is exactly what happened that day in prison. Although talking about God was not allowed; it had to happen to make things right, because that’s what God is about; RESTORATIVE JUSTICE.