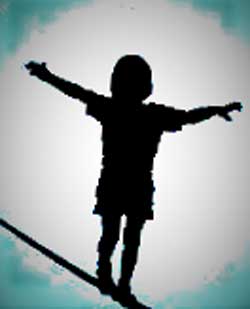 I was six years old and Ruth was eight. She was plenty more experienced in life than me. Bravery was her forte. Our childhood home had a natural boundary of tall trees and scrub separating us from a dental clinic, still in the early stages of construction. Wanting to explore the jungle of raw beams and kick up the irresistible mounds of sawdust, we squeezed through the brambles. Ruth, after scoping the place, naturally climbed to the highest cross-beam—a whole four-inches wide—where she balanced herself like a trapeze artist. I stood on the ground —my eyes glued to her.

She ignored me. My body tensed as she began to make her way across the beam, lifting pointy toes high and then dipping them low before she placed each foot on the beam. By the time my jaw hit the ground she was on the other side and had a smarty pants grin spread from ear to ear. She looked down at me.

What choice did I have? I had to do it. I couldn’t chicken out. Not now, not in front of Ruthie. So, I climbed, and after three anxiety-stricken steps I toppled over, landing squarely on my back, the breath knocked out of me. I lay on the dirt, panic turning to hysteria as I tried to gasp for air. Ruth’s face blocked out the sun as she wagged her head over me in disapproval. 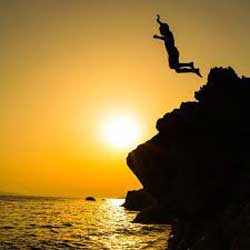 In January, when the water was at its coldest and wildest, I white-water rafted in Rishikesh on the Ganges with family and friends. After riding the current’s crazy ups and downs, experiencing the thrill of shooting through the rapids and dodging boulders, we finally reached calmer waters, signalling the end of a scary journey. Our raft driver pulled the craft over to the shore and pointed up to a precipice that peaked over the river.

“If anyone dares to climb to the top and jump off into the river, now is the time to do it.”

Walking on a narrow ledge at a great height scares me—but water doesn’t. I’ve always been zealous about water. A friend in the raft looked at me with a sparkle in his eyes.

Being full of zealotry I didn’t hesitate and began the climb to the peak. When I reached the summit, I peered over the edge. The view was not at all what I expected. The anticipated dream of leaping gracefully vanished. It wasn’t going to be easy. I gaped at the unforeseen reality.

Positioned 30 feet above ground I had a clear view to the water. The only place to jump was directly on top of pointed pillars, albeit underwater, but hidden from ground view.

From my perch it looked deadly. Giant spears, or menhirs from Obelix comic books. I couldn’t jump past them or to the side of them. My only choice was to aim FOR them and hope for the best. Since I’d climbed to the top, I resolved to make the jump and began to take off my lifejacket. Then I heard the guide shouting.

“You better keep that jacket on!”

I obediently buttoned up again and took my place, inching my toes to the cliff’s edge. My one hope was that the raft driver was not a daft driver and knew what he was talking about when he dared us to jump. Closing my mind off to all else, I leapt into the air and did a death-defying plunge into the river. Lo and behold, I came up without a scratch! I swam to the edge in my weighted-down clothes and slowly dragged myself out of the water. Now I had the sparkle in my eyes. I looked at my friend.

He began to climb the precipice. When he reached the top, he did exactly what I did; he looked down. Big mistake. He saw exactly what I saw: the pointed pillars, the giant spears. He made up his mind.

I’ve always loved playing guitar and composing songs. In my mid-fifties I was a folksinger wannabe and decided it would be fun to make an album. After sharing this with an older and wiser friend, he advised that I was “well over the age for such youthful goings-on, and it was not the time for me to engage in gigs and such doings.”

I knew his advice held some—or a lot—of truth. And I was crushed. My gusto plummeted. Truth is a hard call.

Then I had a phone call.

“Hello,” said the voice on the other end. He was a well-known recording artist. I was baffled. Why would he be phoning me? He began to give me some excuses as to why his upcoming concert was not going to happen… and then suddenly he asked, “So, do you want to do something?”

I was floored. I knew of this famous young recording artist, but had never met him, and here he was asking me if I wanted to do something? Well, I wasn’t going to waste anytime beating about the bush.

“Do you want to make an album with me?”

I braced myself for his answer. It came without hesitation.

“Sure! We’ll do it in Lucknow at my studio and use my musicians!”

I was speechless. He knew nothing about me or my talent. Still, he offered to make an album with me. I packed my bags for Lucknow!

I’ll never forget that trip (and doubt that I’ll have such a chance again). It was an absolute dream come true! The songs turned out awesome.

The Write Challenge … or, The Last Act … or, The Beginning!

Exactly one year ago, I thought Sid’s challenge was a big. Sid is an overflowing bag of enthusiasm, enticing all to greater heights. He is fluid with good-willed lectures and positivity pours from his mouth.

“Come on, you can do it. Get your own website. You are a writer. You have lots to share. All you need to do is a write a story once a week for one year.”

I was at Sid’s mercy; it is impossible to resist his fervour to encourage. Little did I know what the year would hold for me. Now, exactly one year later, two hospitalizations later, becoming a crippled person later, the challenge has been completed. Thank you, Sid. 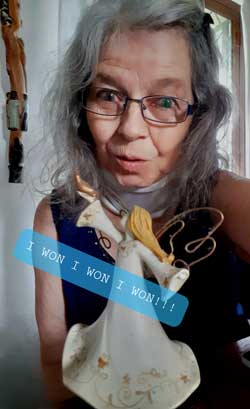 Congratulation me in the comments. With the end of this story, I begin. What challenge could possibly come before the last act but a second year of writing?

It’s scary, I assure you. Wish me luck and read my stories.

A word of advice:

Live according to the childish enthusiasm of your dreams, let others well-meaning thoughts about your age go in one ear and out the other.

Song Challenge – Keep me as Your Child

Love your stories!! Thanjs for sharing the. Congratulations❤

Love your stories!! Thanks for sharing the. Congratulations❤

Beautiful song! It is amazing what God does through us! Thank you for sharing. ❤

Love your stories. Thank you for your amazing expressions!!

I especially like your advice to stay childish. Of course the description of me walking across the beam is awesome. I love this song!

Frieda, I love hearing you sing this beautiful song! You are certainly one of the bravest people I’ve ever known, and one of my first role models. 💕

It is a gift to have a heart like a child in todays world. Keep writing and singing.

Am loving your stories.

Please keep writing, especially for us who love your stories and sharing. Thank you for the courage to share.

Dear Frieda,
Your courage and determination are inspiring! Having known you in our youth, and catching up on visits during your trips back to NA, really helps me picture these events. Keep writing please!

Always love your stories Frieda. They really are you! Keep writing

i kinda sorta definitely almost always love ur stories, esp when they end with the sweetest cutest observations! <3

God bless you dear Frieda, I'm blessed by u and ur child-like joy in our Father's grace and strength!